Cauliflower Latkes make for a great meal or snack if you're in the market for some tasty and satisfying low-carb eating options.

This recipe started out as a low-carb flatbread but because I doubled the amount of the cauliflower base, the recipe was not exactly a flatbread. Although the finished product was not what I had intended, it was good enough to enjoy for dinner a few nights ago and the leftovers made for a great lunch the next day at work. Might I just add that this recipe for cauliflower latkes pairs quite nicely with a nice glass of cab.

Whether you want to make some crispy and thin low-carb flatbread using cauliflower, or a batch of cauliflower latkes that are a bit thicker and softer,  the ingredients are the same but with different amounts. If you want to go the low-carb route, just use half the amount of eggs, cauliflower, and cheese.

With either the low carb flatbread version or the latkes version, I knew that I was going to use some fresh rosemary and cherry tomatoes. I love oven-roasted cherry tomatoes and the natural enhanced sweetness of the tomatoes from the roasting process was a wonderful topping to this low carb recipe. I also love using fresh herbs in the kitchen. Rosemary is such a versatile flavoring agent, check out one of my all-time favorite Platter Talk dishes that uses rosemary: our lemon-rosemary chicken.

I have become enamored with caramelized onions and I think it all really started when I made this simple goulash recipe a few weeks ago.

I love the structure and sweetness that caramelized onions impart to other ingredients.  I found some great information from Food52, regarding the process of making caramelized onions and the different transformations that the onions undergo based on the length of time they are cooked. Learn more about how to carmelize onions.

The cauliflower is sliced up and then placed in a food processor and shredded to a rice-like consistency. Next, use your hands to squeeze out as much water from the cauliflower as possible. We use two heads of cauliflower in this recipe for latkes and squeezed about two cups of water from each head.

After mixing the base ingredients together, we roll it out on parchment paper and then we use a pizza peel to slide it on a hot stone for the oven. Using a preheated stone will help you achieve a nice crispy bottom for these cauliflower latkes.

Use a pizza peel like this one to transfer this (or a traditional dough) to a hot pizza stone. 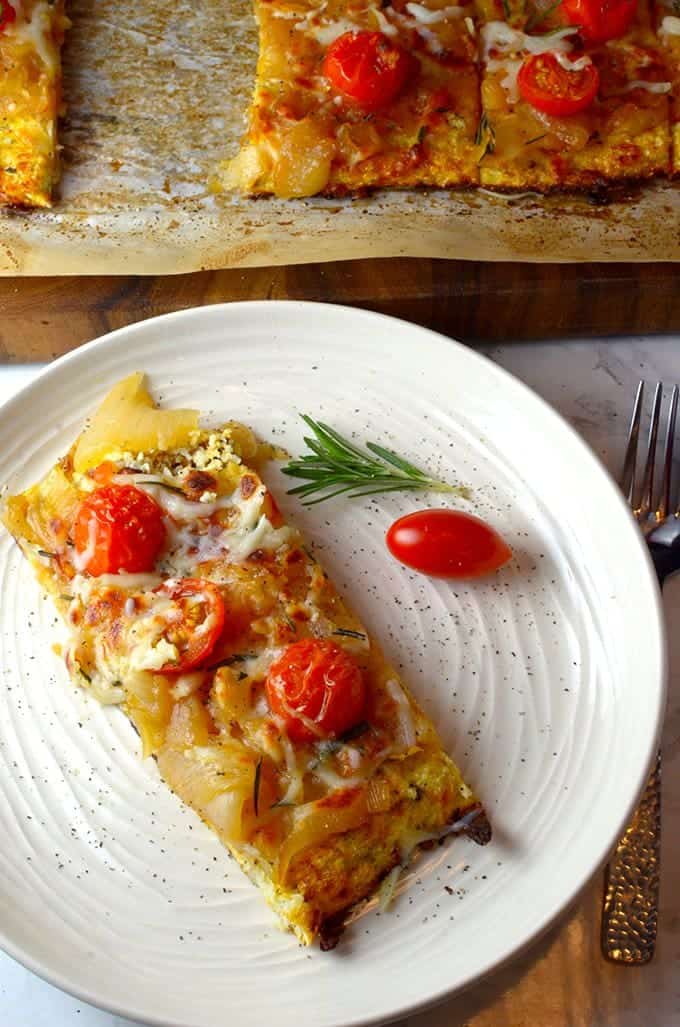 The topping for these cauliflower latkes is as simple as the rest of the process. A pan full of sweet and jammy caramelized onions, some chopped rosemary, sliced cherry tomatoes, and a sprinkling of shredded cheddar cheese. That's all it takes! Baked, not fried, vegetarian and low carb, this is a fresh and healthy recipe that is worth making. - Dan

Cauliflower Latkes and Low Carb Flatbread are two baked and grainless alternatives to traditional latkes. This recipe is for the latkes version, for flatbread, simply halve the ingredients for the base.
5 from 1 vote
Print Pin Rate
Prep Time: 15 minutes
Cook Time: 45 minutes
Servings: 6 servings
Calories: 354kcal
Author: Dan from Platter Talk
Cost: Under $10