Jump to Recipe Print Recipe
Potato Leek Chowder is a savory and seasonally fresh entree and delivers all things autumn, from soup bowl.

Summer is starting to fade.  Crisp autumn days are quickly approaching.  We spent this past weekend at our little cottage in the middle of Nowhere, Wisconsin.   As a reminder of the season, the temperatures were in the 50's when we started our Saturday.  However the sky was blue and there were no clouds to be found anywhere and we knew it was a perfect day to visit our favorite farmers market in Elkhart Lake.

When we arrived at the market, soup was on my mind, no doubt because of the cooler weather.  As we walked around clutching our market-fresh hot coffee,  I let the fresh produce talk to me at each stand we passed.  The first thing that I laid my eyes on were gorgeous leeks.  Even though I have never cooked with them, I knew that they would be a wonderful base for the soup that I was so craving.  As we continued to walk around, more beautiful produce appeared, fresh baby red potatoes, onions, lush and succulent sweet corn.  I knew that this soup was going to be just the ticket.

Back at the cottage I surveyed the pantry and refrigerator.  White wine, heavy cream, shredded cheddar cheese and chicken stock were all placed on the counter, patiently awaiting their turn to bathe in the stock pot with the leeks and potatoes.   Even more,  I knew that I hit jackpot when I found bacon hiding in the deli drawer of our fridge.   As the bacon started to fry, vegetables were chopped and sautéed, wine was opened, some was drank (don't judge me), and the soup quickly took shape. By the end of the afternoon I exceeded my expectations on this soup.  I can't wait for fall to officially show up so that I  can come up with even more new soup ideas and unless Dan has his Nikon surgically removed from his body, you can bet we will be sharing them with you.   -Scott 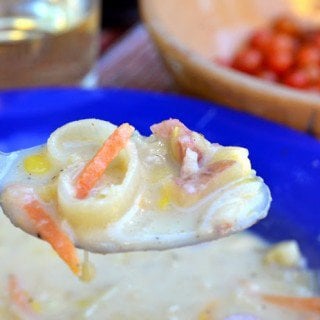