Saturday mornings always come quickly and if you're looking for a simple and to feed your early morning weekend gang, this easy breakfast quiche recipe is just the ticket. Make this hash brown quiche and take time for that second cup of coffee, after all it is the weekend! 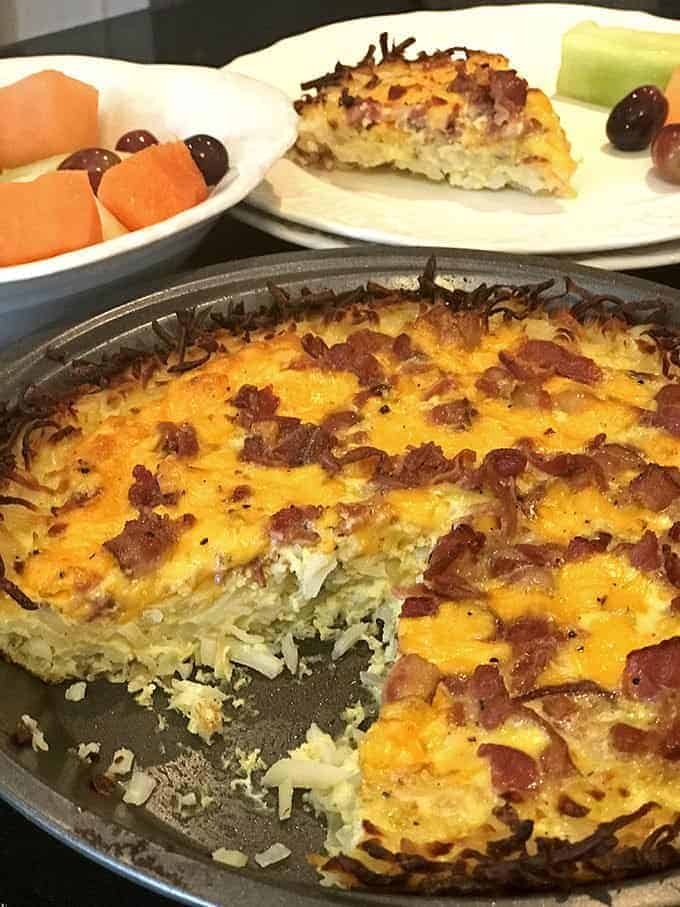 This easy breakfast quiche recipe will feed a crowd for about $10 or less!

I feel that some of my best recipes come from when we are spending time at our little cottage in the middle of Nowhere Wisconsin.  I am not certain why.  I think that it is the challenge of using what we have on hand there, and most times it’s not a lot. 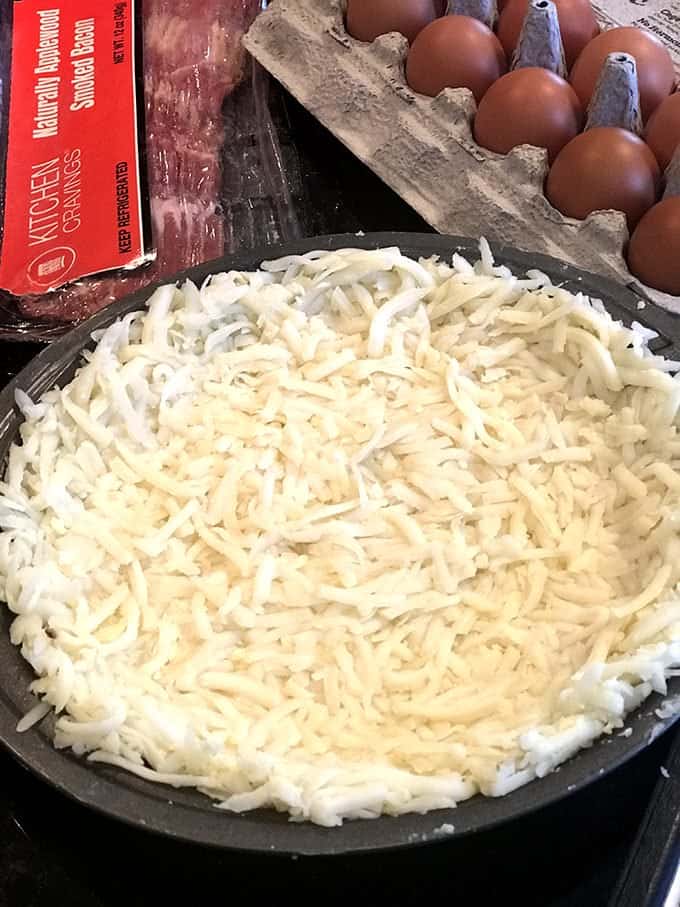 Melted butter is combined with hash browns to make the crust for this gluten-free quiche. 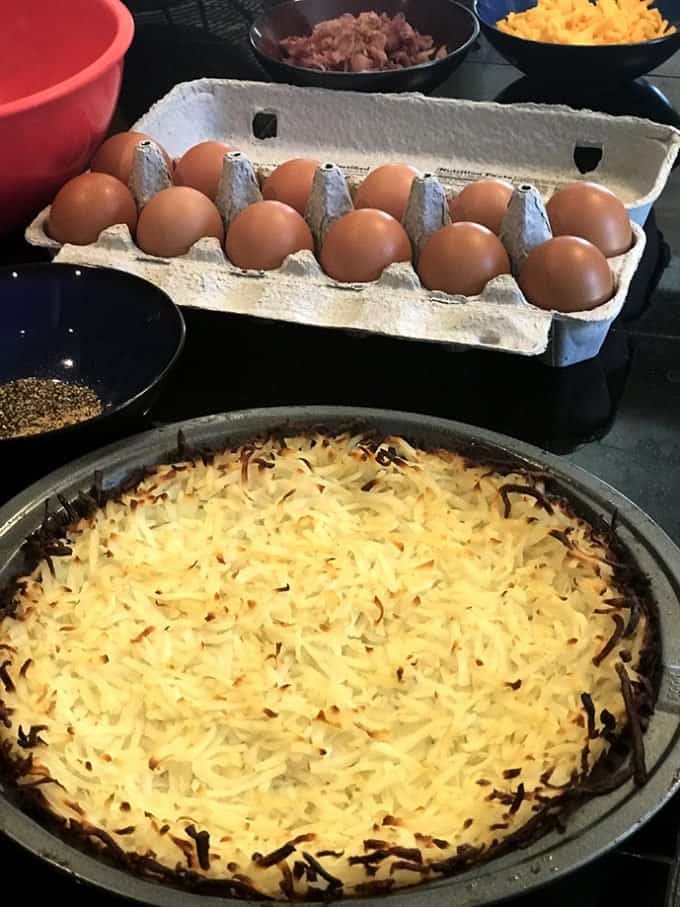 The hash brown crust spends about 25 minutes in a 450° oven before the quiche filling is added.

This past weekend was the first time in a long time that we were at our cottage.  Because of this, we literally had nothing on hand.  On the way up, I stopped at the gas station and ran inside to do a quick shop.  When I saw that they had a package of hash browns and eggs, I knew immediately what I was going to make for breakfast, this hash brown quiche with bacon. 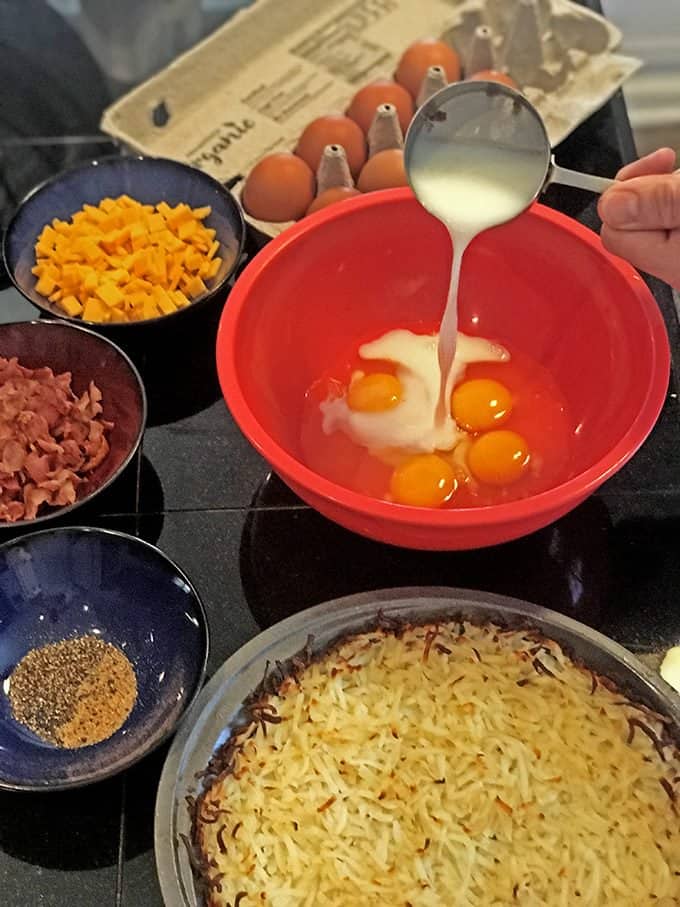 It only takes a few basic ingredients to make the filling of hash brown crust quiche with bacon. 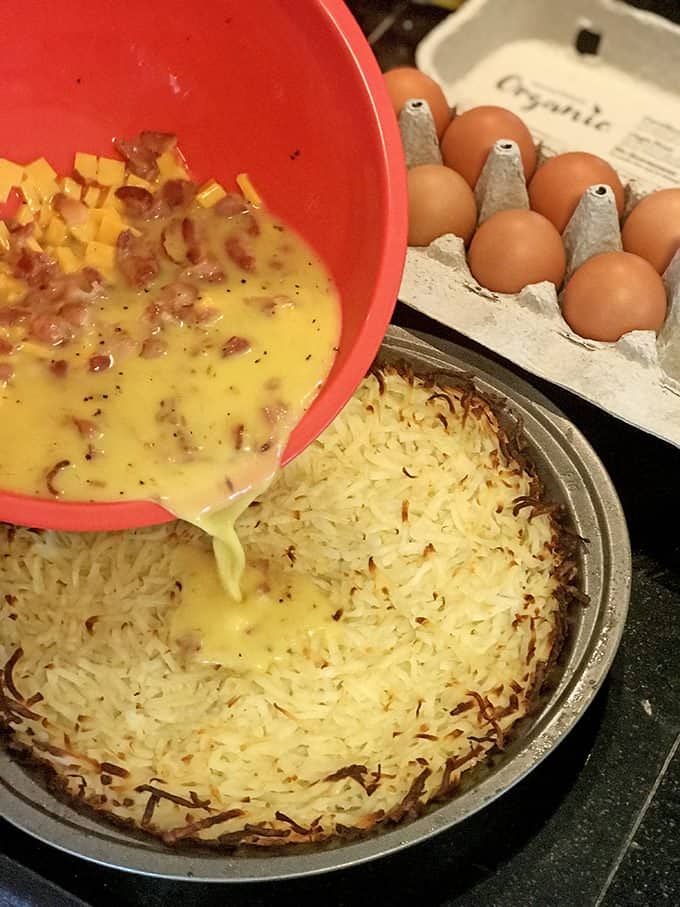 The filling for this gluten-free quiche is poured and then the whole thing goes back in the oven, where the temperature is lowered 350° F.

This easy breakfast quiche recipe can be made for about $10

When I saw that they had a package of hash browns and eggs, I knew immediately what I was going to make for breakfast, this hash brown quiche with bacon. After getting some other staples like cheese, butter and milk, I drove up the rest of the way thinking about how I was going to put this together 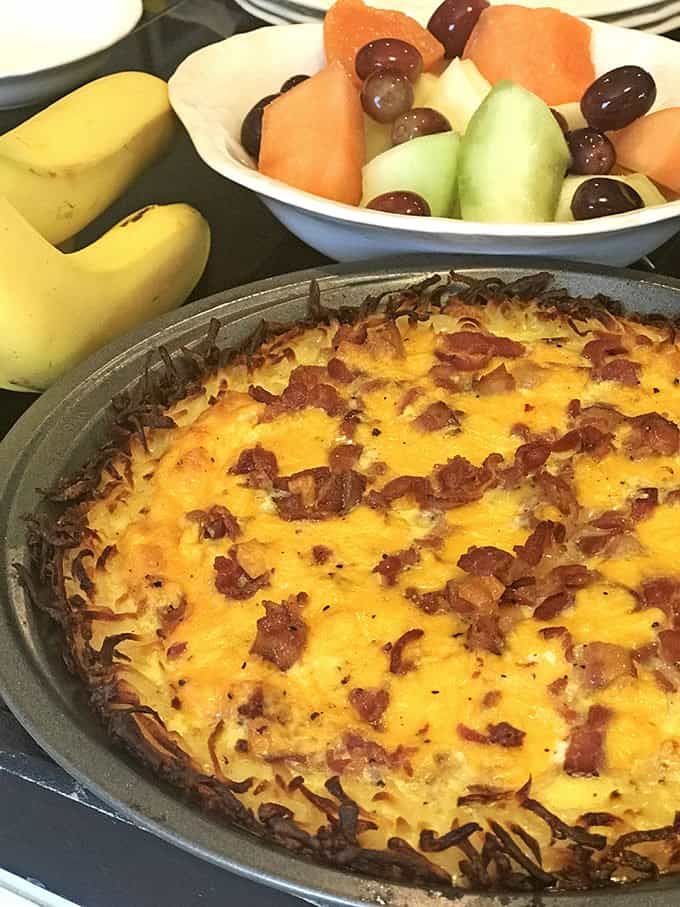 We add bacon to this easy breakfast quiche recipe but you can use whatever you have on hand.

Although we add bacon to this fast and easy breakfast idea, use your imagination and go with your own taste! Your taste buds and refrigerator are the limits of what you can add to this gluten-free quiche. Here are just a few possibilities:

I assembled all of my ingredients and called Dan into the kitchen.  After telling him what I was thinking, he ran and got his phone and started taking pictures.  (No fancy camera this weekend!) This is scary sometimes because you don’t know how the recipe will turn out.  However, I had a good feeling about this easy breakfast quiche. 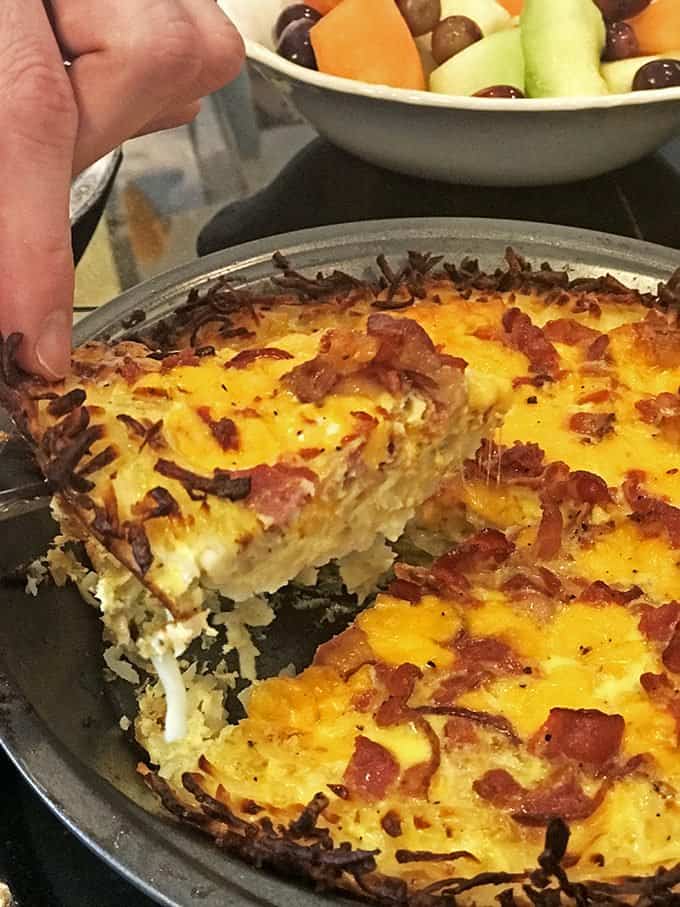 The butter and hash brown crust holds make this a gluten-free quiche and the whole thing stays together quite nicely!

This easy breakfast quiche goes together very quickly.  I kept it simple with just cheese and bacon because that is what the kids like.  However, you can put anything that your heart desires.  I personally think mushrooms and ham would be delicious. It's the weekend, take the time for that second cup of coffee and try this hash brown quiche, I think you're going to really enjoy it!  -Scott
If you're looking for more Easy Weekend Breakfast Ideas, here's a shortlist of some of our favorite recipes!

All of our kids love this hash brown quiche, even Joe who won't normally eat eggs.

We have a couple of other quiche recipes you will enjoy. Our Crustless Vegetable Quiche Recipe is very popular with the gluten-free crowd and our Mini-Quiche Recipe is a fun appetizer that is perfect fort a weekend brunch. 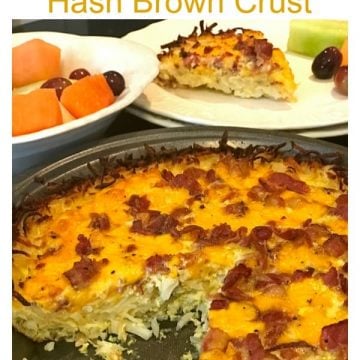 You're going to love this easy breakfast quiche from Platter Talk because it uses just a handful of ingredients and can be made for about $10. Make this hash brown quiche with bacon to feed your weekend crowd and have time to enjoy that second cup of coffee!
5 from 1 vote
Print Pin Rate
Prep Time: 15 minutes
Cook Time: 55 minutes
Total Time: 1 hour 10 minutes
Servings: 8
Calories: 369kcal
Author: Dan from Platter Talk 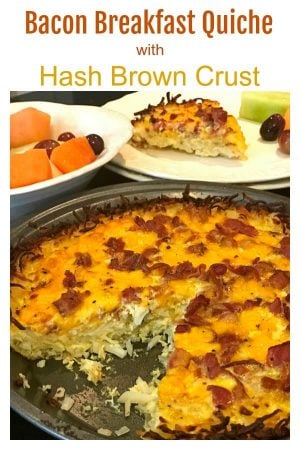