Today we showcase this Rhubarb Vanilla Pound Cake from Melissa Clark via the New York Times. It's clearly another rhubarb sensation and in case you don't care for rhubarb, we've got you covered. You can make this gorgeous vanilla pound cake with blueberries, strawberries, peaches, or, nothing at all. It's that good! 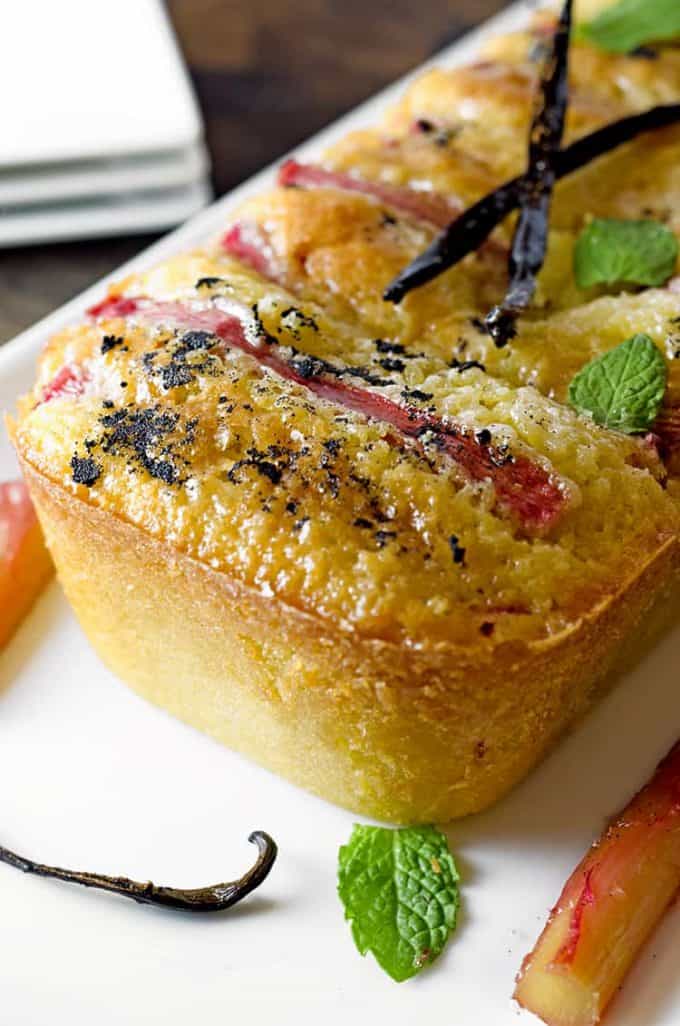 When I was a kid I wouldn't go near anything that my mom would make with rhubarb. Now I'm growing old and I can't imagine myself staying away from the stuff that signals the beginning of summer and all of it's glorious foods. I've had my eye on this vanilla pound cake recipe for a few weeks now and when I first saw it in the New York Times Cooking section I knew I had to make it. 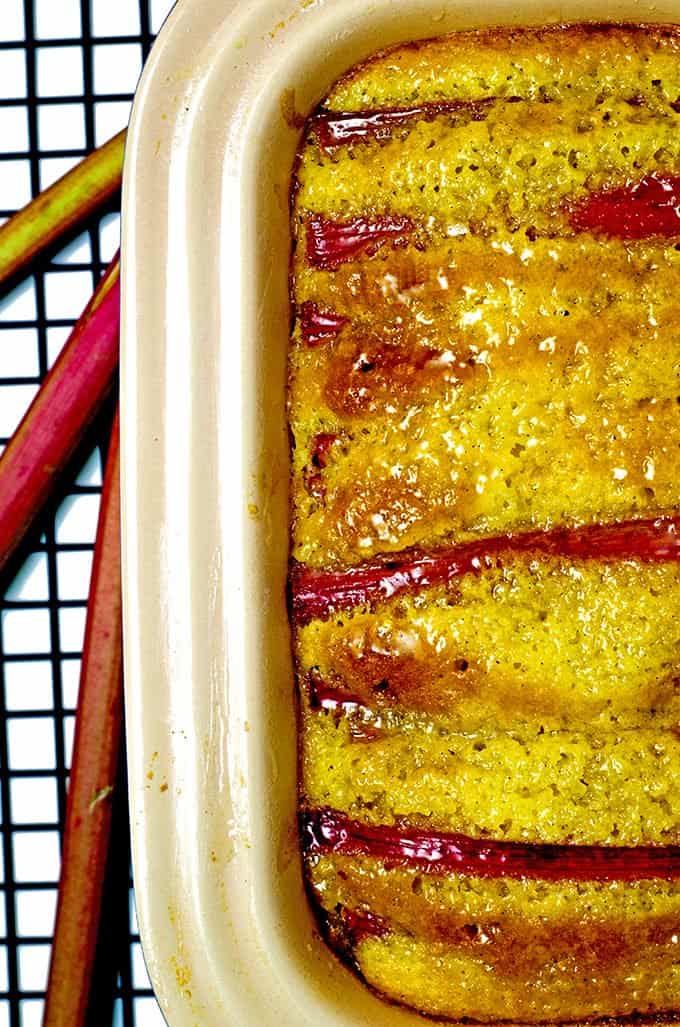 This rhubarb cake has tender stalks of vanilla-poached rhubarb in it.

Most of us think that the red stalks of rhubarb are sweeter and taste better than their green counterparts. Although red rhubarb may be prettier to look at, green varieties of rhubarb such at Victoria are among the sweetest. Here's a good resource on rhubarb varieties. 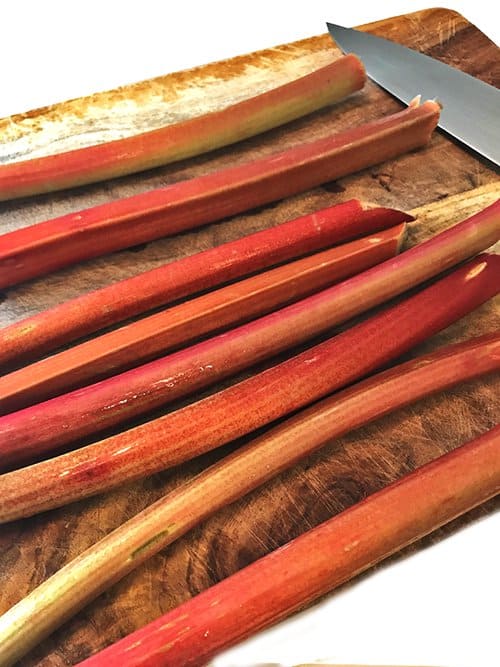 Red stalks of rhubarb add a nice color to this vanilla pound cake. 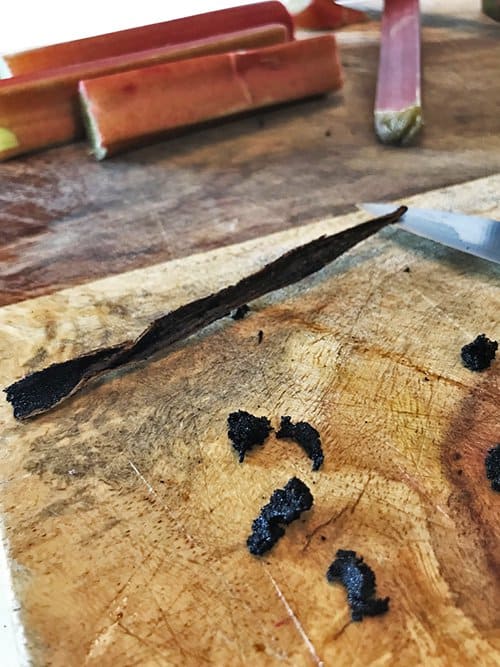 You can can find vanilla beans at most spice stores, like Penzy's.

The base flavor of this vanilla pound cake recipe comes from a vanilla bean and it's seeds, along with some pure vanilla extract. I've never worked with whole vanilla beans in the kitchen but thankfully I found a couple of them that I had picked up at Penzy's Spices, some time ago. Fortunately, if you keep vanilla beans sealed and protected from light, they will last for a couple of years.

Start this rhubarb cake recipe by cutting some rhubarb stalks into segments about 4 inches in length. You will want them just a bit more narrow than the width of your loaf pan. Then, cut the rhubarb segments down the center, lengthwise. Next, divide a whole vanilla bean in half, slit it down the center and scrape the vanilla seeds out of it. Then,

Make a Vanilla Simple Syrup and Poach the Rhubarb 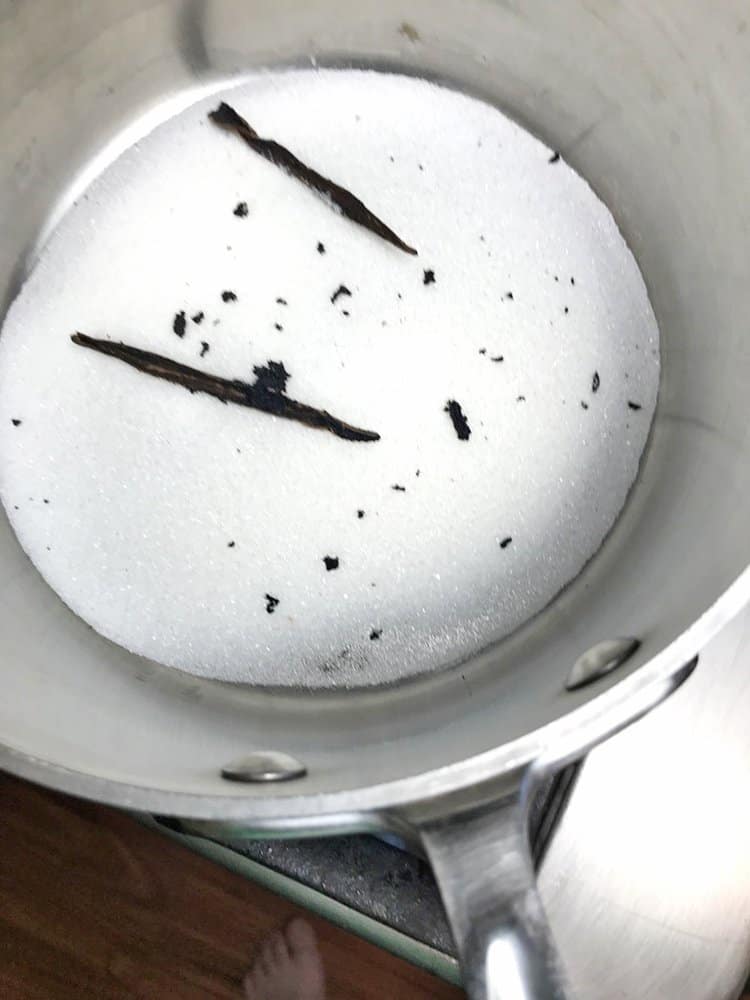 A simple syrup is created using the vanilla beans and their seeds. 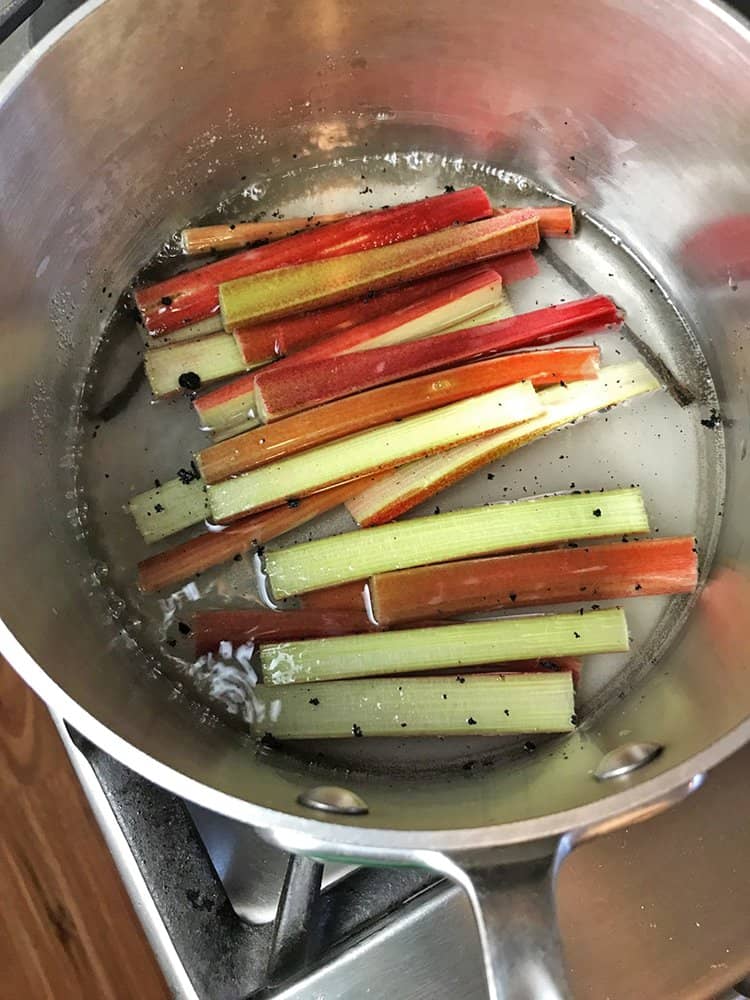 The rhubarb segments are poached in the vanilla simple syrup.

Combine some sugar with water, add the vanilla bean and it's seeds and bring to a boil. Reduce this mixture to a simmer and add the cut and sliced rhubarb segments and poach for about 2 minutes. Remove the rhubarb and let it cool to room temperature and reserve the poaching liquid - you're going to use this once the rhubarb cake comes out of the oven. 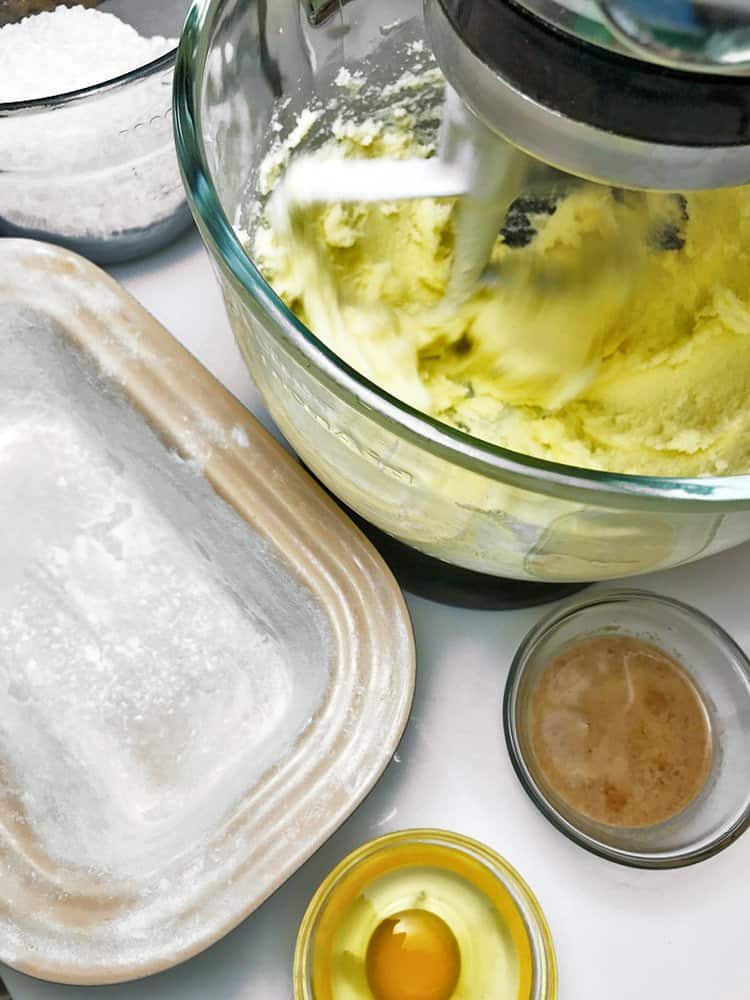 Start the cake batter by creaming some butter with the eggs. 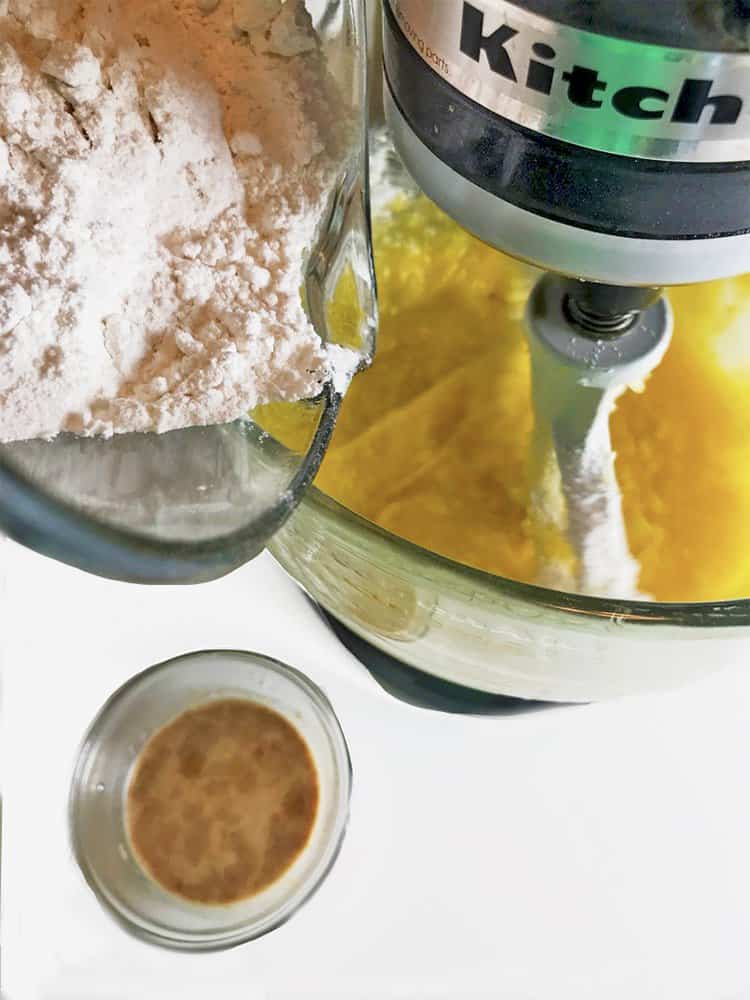 Add the cake flour to the wet ingredients, a little at a time.

When using a KitchenAid stand mixer to make a dough or batter, always use the lowest gear possible. If you don't, there is a "worm gear" in the KitchenAid that will break and cause it to not work. This is actually a protective mechanism that will keep the motor from burning from being overworked.  If this happens, the good news with this scenario is that you won't have to replace your KitchenAid. The bad news is you will still have to have it repaired to replace the worm gear.

Now you want to divide the cake batter into two even portions and pour half of it in the prepared loaf pan. I'm a bit of a nerd and I enjoy playing with kitchen gadgets but I also like accuracy when baking, it can make or break a cake recipe. For this reason, I always try to measure the cake batter by weighing it if it has to be divided with precision. 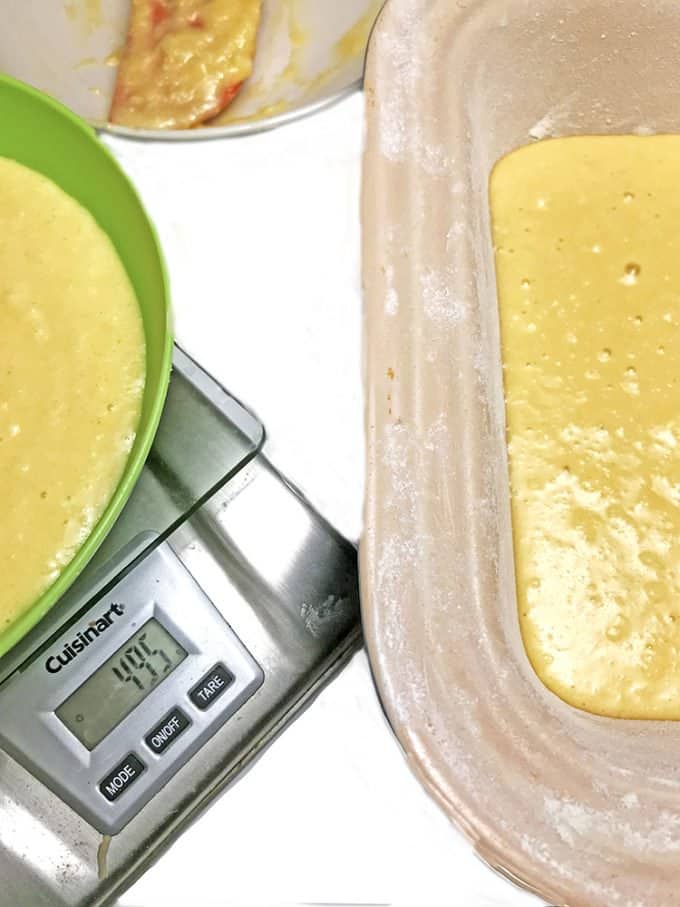 It's always best to weigh batter if you have to divide it evenly.

Call me a nerd, or maybe a baking nerd, but I love my kitchen scale. We bake a lot with our kids too, it's something they love to do. Using a kitchen scale to ensure accuracy helps their recipes to turn out better and it's an awesome review in mathematics for all of us! 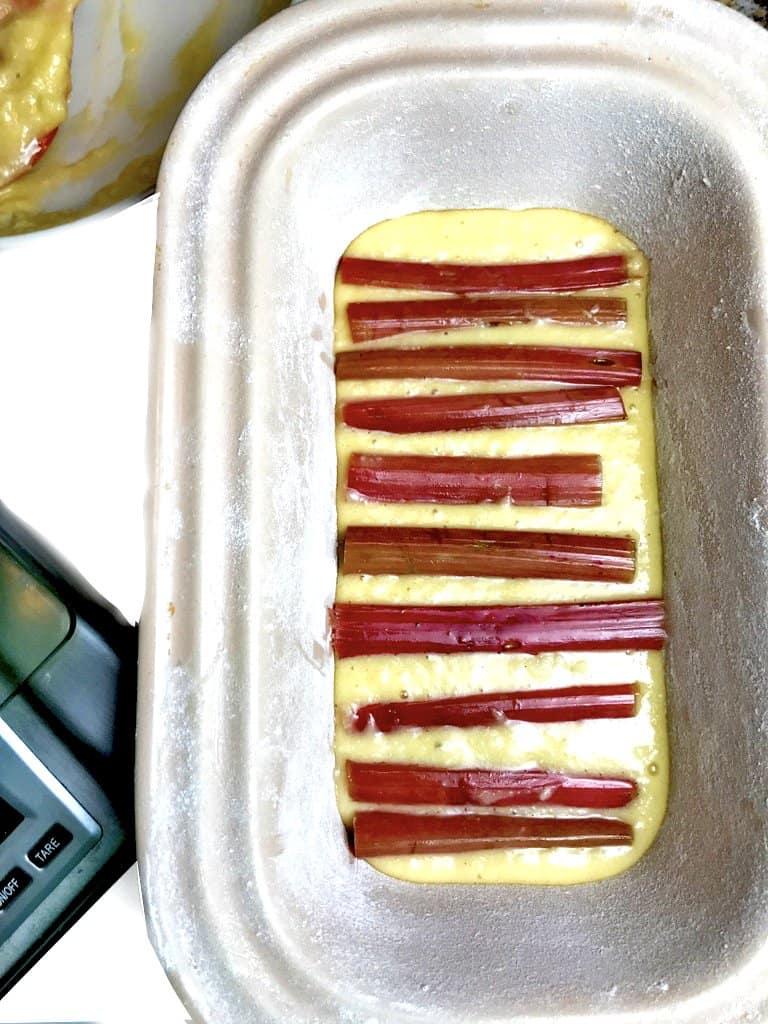 Pour half the batter in the loaf pan, top with a row of rhubarb. 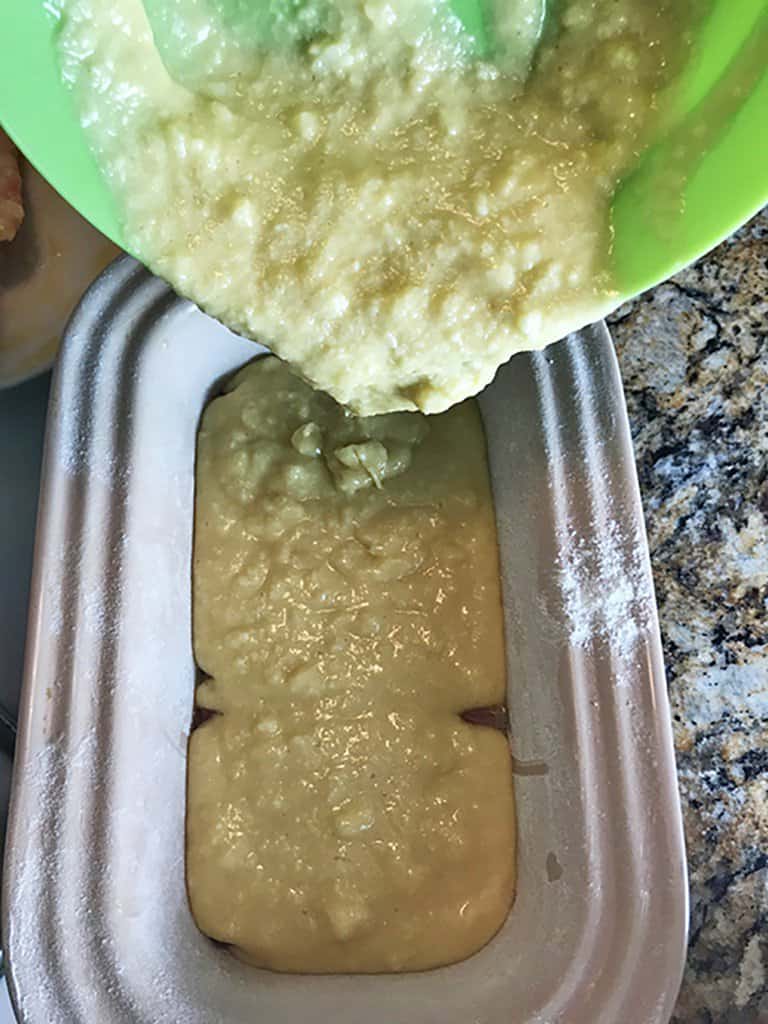 As you can see, half the rhubarb is added to the first layer of batter. Then, the rest of the batter is poured over the rhubarb. We're going to bake the cake for about 20 minutes at 350° F, just long enough for the top of the batter to "set". Then we will add the top layer of rhubarb and finish baking this delicious rhubarb cake.

Put the Vanilla in this Vanilla Pound Cake! 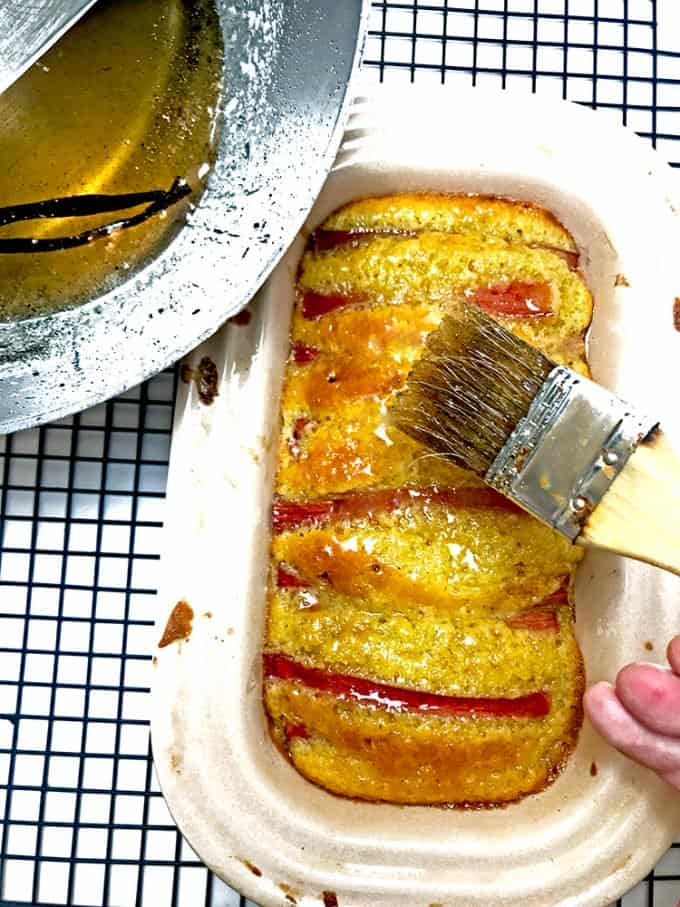 When the cake comes out of the oven brush it with vanilla simple syrup.

Once this rhubarb cake comes out of the oven, you're going to brush it with the reserved poaching liquid from earlier. First, you'll reduce it slightly and you'll probably have a bit leftover.

Hint: Before adding this layer of vanilla simple syrup, use a toothpick and poke a bunch of holes in the top of the cake, evenly throughout. These little pores will allow that sweet vanilla goodness to seep deep within the cake, adding flavor while preventing your cake from drying out. 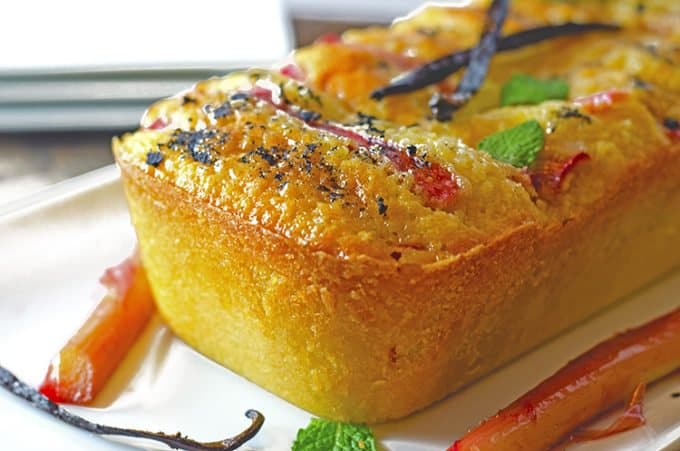 You can see, we garnish the top of this vanilla pound cake with some additional vanilla beans, and a leaf or two of fresh mint leaves. The colors, textures and most of all flavors all work magic together. Our guests raved over this rhubarb cake. 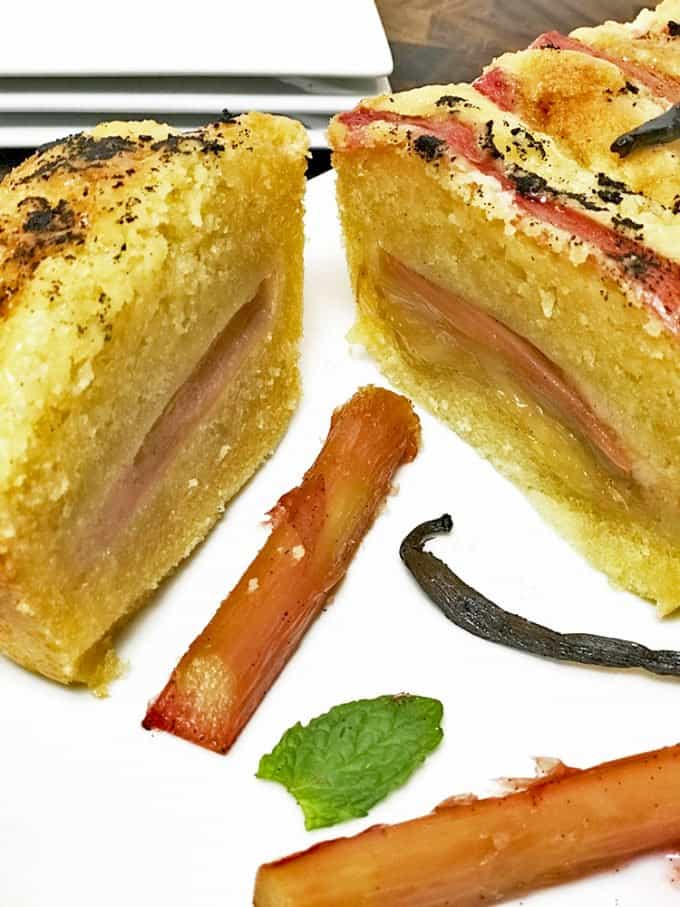 Don't care for rhubarb? Try substituting blueberries or strawberries or peaches in this vanilla pound cake.

Rhubarb makes its appearance here in the mid-west as a signal of beautiful weather and fresh produce. We have a few other great rhubarb recipes that you might like, including our rhubarb slush, and our rhubarb upside-down cake. 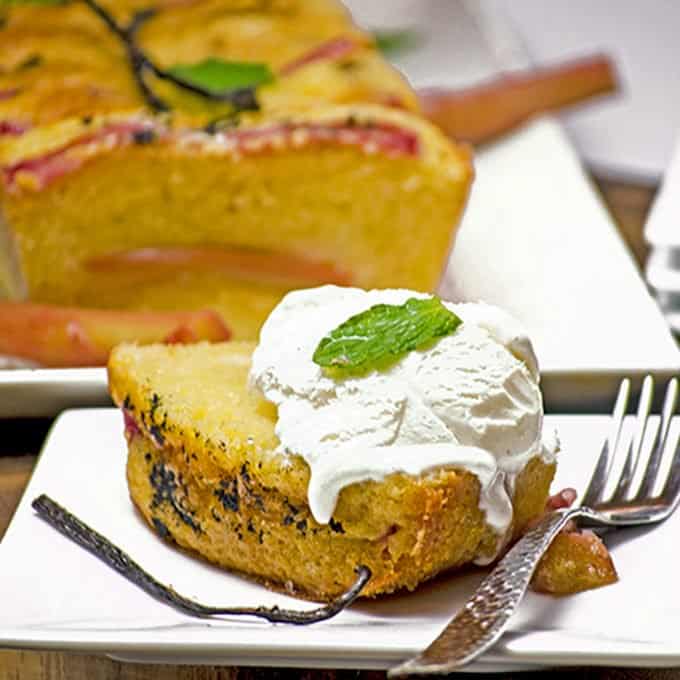 Try this Rhubarb Vanilla Pound Cake and let us know what you think of it! 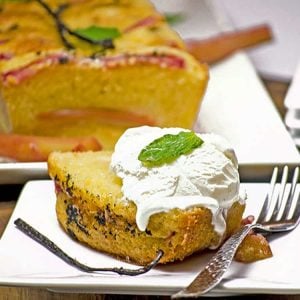 For the Rhubarb and Vanilla Glaze

For the Vanilla Pound Cake

For the Rhubarb and Vanilla Glaze

For the Vanilla Pound Cake 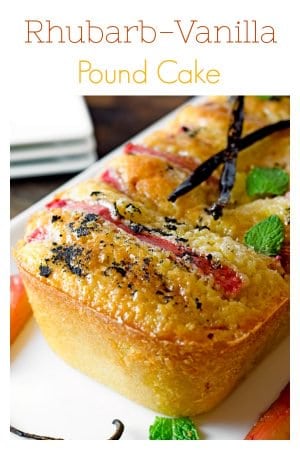