Platter Talk » Collections » Kitchen Tips and Hacks » All About Chocolate 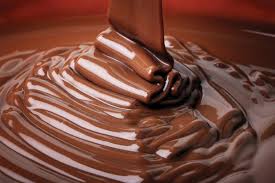 Chocolate is often equated to the feelings of love and said that when tasted, releases more endorphins then kissing.  It is similarly often recognized as having a multitude of health benefits, such as lowering blood pressure, fighting inflammation, and even as an antioxidant. Here on Platter Talk, we liken it much to oxygen.

Evidence from anthropologists shows that chocolate was harvested and made into a drink as far back as 1900 B.C. The drink didn’t taste like the cup of sweet, warm liquid that we drink in our fuzzy socks next to a crackling fire. The chocolate drink back then was bitter and most likely had hot chilis added to it as a flavoring. But who cared? It was known to be an invigorating mood enhancer, provider of good heath and aphrodisiac. 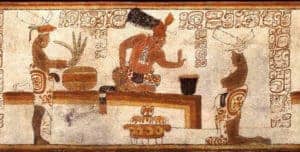 Ancient Mayans used a metate, a rectangular mortar made of stone, to create a chocolate with an intense flavor and gritty texture.

Chocolate is harvested from a tree. Picking dangling bars of Lindt, Valrhona or Cadbury is not how it happens, though. Instead, it begins as a large pod (about ½ the size and shape of a football) which grows from the side of a tree’s trunk, not the branches as you might assume. Once picked, the pods are split open and the the beans are scooped out. Next they’re fermented, dried, roasted and shelled to extract the interior kernels called nibs.

Chocolate starts with beans that grows within the pods of coccoa trees.

Assorted cocoa nibs are used to produce different flavor profiles in chocolate just as different coffee beans are used for your favorite blend(s) of coffee. Where the chocolate beans are grown, how they’re fermented and augmented “roast” time are all integral to the production of quality and flavor of the chocolate. 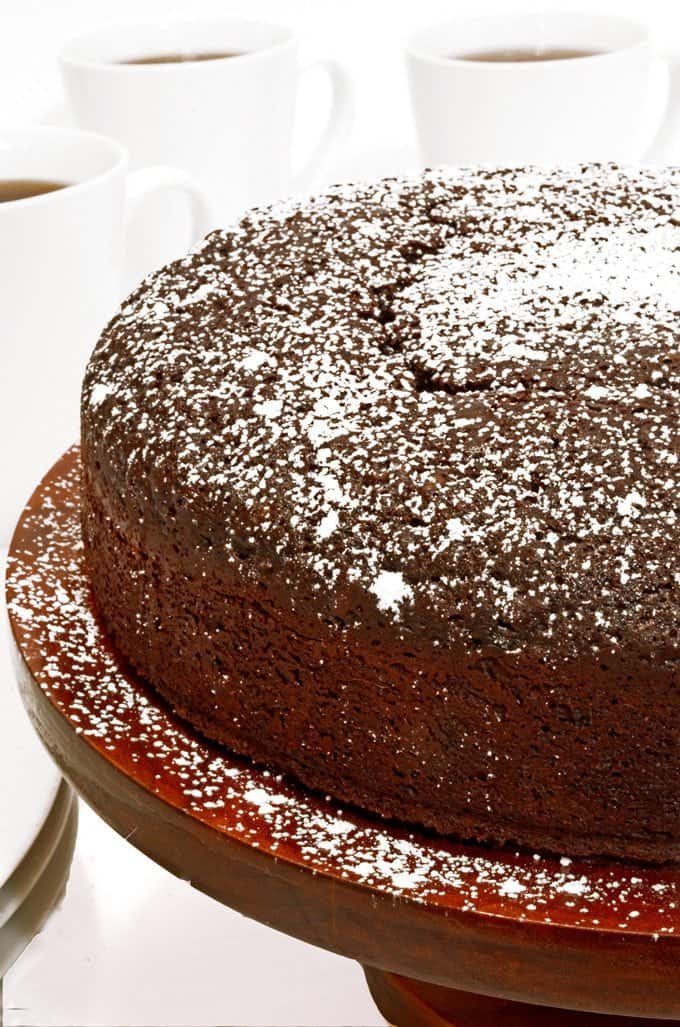 Our Chocolate & Coffee Whiskey Cake is a delectable example of other flavors that pair well with chocolate.

Once the correct proportion of various types of nibs have been joined together to achieve the desired target flavors, they are ground until they form what is known as the chocolate mass or chocolate liquor. This isn’t a type of alcohol (that is liqueur) but what we recognize as unsweetened baking chocolate. This is THE heart of chocolate’s flavor. 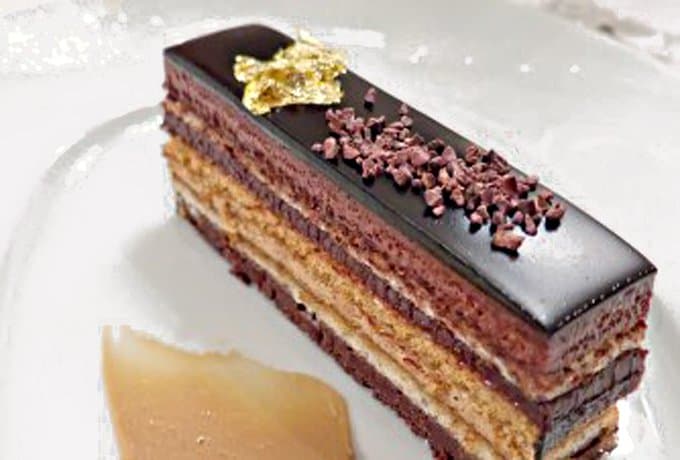 Cocoa nibs can be used to garnish chocolate creations, for an even more heavenly taste.

You can find nibs in specialty stores and some spice shops. The first time I came across nibs, I was told that the nibs could satisfy my urge for chocolate without consuming the calories of chocolate. Although I found them interesting, they are closer to chewing on a roasted espresso bean, than to savoring the gourmet taste of Vosges.

Chocolate can be unsweetened, bitter, bittersweet, semisweet or milk chocolate. White chocolate? Technically white chocolate is not a true chocolate because it contains no cocoa mass. It is made from cocoa butter, milk and sugar. I love it anyway. 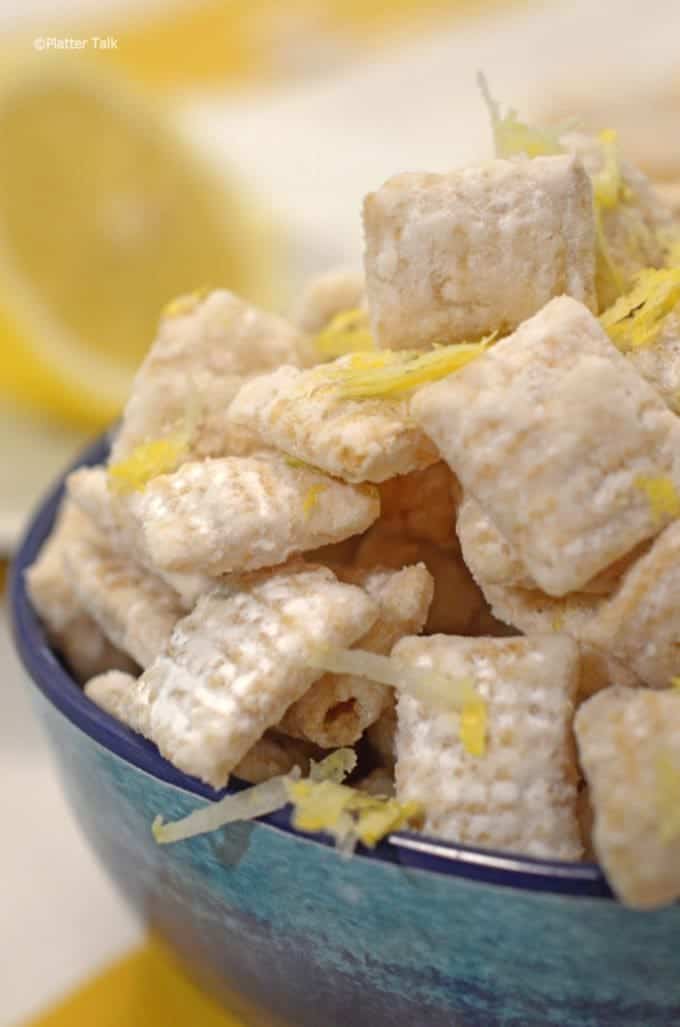 Our Lemon Crunch Buddies are made with white chocolate.

Different types of chocolate are a result the amounts of sugar, cocoa butter and flavoring agents (vanilla, cinnamon, chilis, matcha, citrus, etc.) that are added to the mass by rolling and distributing the added ingredients. This results in thin, dry sheets. The sheets then go through the conching process which is done with heated liquid chocolate in vats.

The chocolate sheets are melted by heat and friction caused by interior rotating panels and rollers that scrape down the the liquid chocolate from the vats walls and base. This step, which can take between 6 to 78 hours, eliminates water vapor and any bitterness of the chocolate by agitating and aeration. It’s this step that, before the pouring , that gives chocolate it smoothness and mouthfeel. 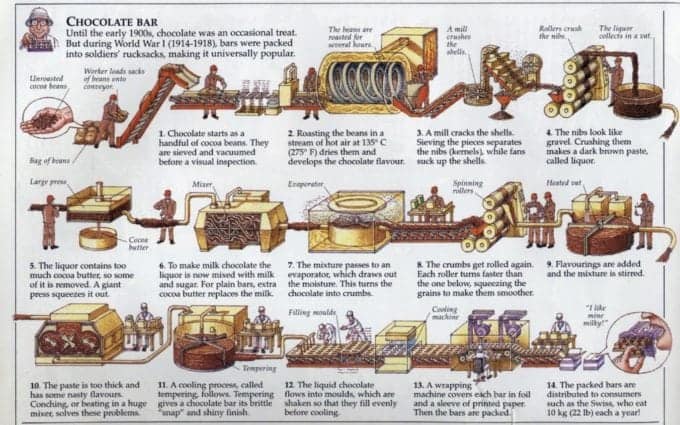 Process for making a chocolate bar.

Factors that Determine Quality of Chocolate: 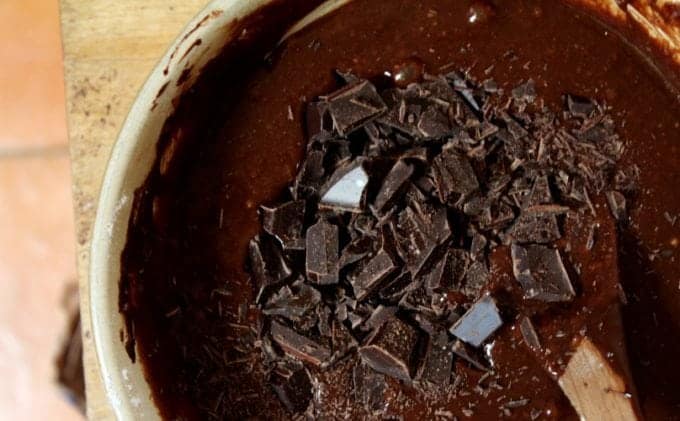 “Always serve too much hot fudge sauce on hot fudge sundaes.
It makes people overjoyed, and puts them in your debt.”
― Judith Olney

Finally, a note about quality, something that I’m all about. You can go to stores, especially around the holidays, and see large blocks of what appears to be chocolate. If you actually read the label, you might be surprised to find that it’s not chocolate at all but instead labeled as a chocolate impersonator.

In the same sense that Velveeta isn’t cheese, none of these impersonators are chocolate at all. Instead, they are all chocolate products. In each of these chocolate impersonators,  most of the cocoa butter, if not all, is being replaced with vegetable fat which has often been hydrogenated. This is done because it’s much cheaper to produce and makes for easier handling when dipping and molding. It also enhances the shine to a finished product. It’s easy, it works, but it’s not chocolate. 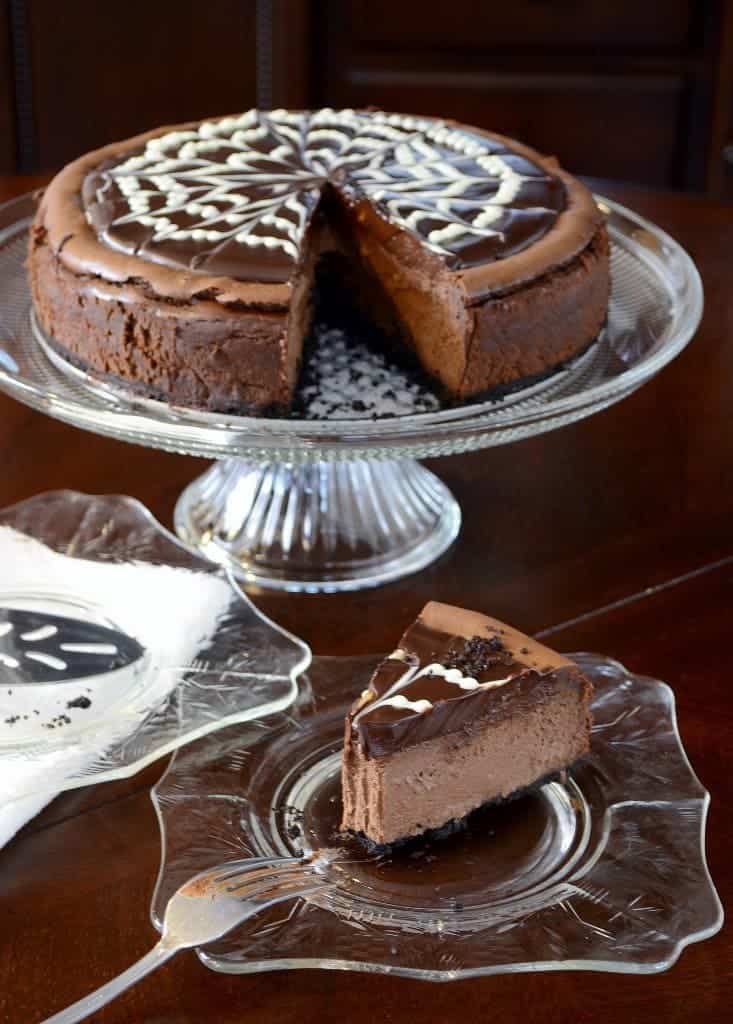