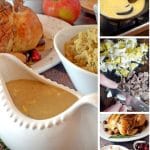 Knowing how to make giblet gravy will magically make an ordinary dinner a special one. It will turn a special dinner into something magnificent.

Our good friend from Texas grew up eating this and shows us how to make his Granny’s version in just 25 minutes!

This southern recipe will make a great dinner even better!

This recipe for giblet gravy uses a regular gravy as a base. The transformation comes with the addition of giblets. Who would have guessed that little bag you find inside the cavities of store-bought chickens and turkeys could contain so much magic?

My late mom’s family recipe for turkey dressing includes giblets from the bird, and as a kid it was added flavor that I never could fully appreciate.

Oh, how things can change over the years, including palates and taste preferences.

The beautiful thing about this easy gravy recipe is that you can make it using turkey or chicken giblets.

Unless you are using the store-bought stuff in a jar, all gravy starts with a roux. This is a combination of equal parts fat and flour. We’ve done an entire post about how to make a roux. It’s life-changing!

The other major ingredients for this giblet gravy include the broth (or stock if you are using that), and of course the giblets.

Butter: Butter is always great for making gravy, but you can also substitute some of the pan drippings for this purpose. The drippings will add even more flavor to this recipe!

Broth: If you can, make your own! It freezes well and you can easily thaw and use it when the time comes. What the difference between stock and broth? We did a post on that for you as well!

Why it’s better to make your own broth (or stock):

Giblets are the star of this old-fashioned gravy. But what are they?

They aren’t always the most pleasant things to think about, unless you’re adding them to enhance the flavor of foods such in this recipe.

Giblet include specific organs of fowl which usually include:

Some people call this turkey neck gravy, but you’re going to use all of those little pieces that are found in the separate bag that’s inside the cavity of your bird.

Each of these giblets adds a small bit of powerful flavor, including the neck with it’s tender meat and flavor-giving bone.

Start this giblet gravy with a roux. A roux is an essential part of any homemade gravy or sauce and many soups and stews.

Like the rest of this recipe for giblet gravy, this part is super simple.

Bring the broth and seasoning to a boil and then use a ladle to gradually sir some of the broth into the roux.

Next, you’re going to gradually transfer some of the thinned-out roux, back into the saucepan of broth. Maintain the broth at a low boil while you slowly whisk the roux into the broth.

Finally, stir in the chopped giblets and the chopped hard-boiled eggs. Your giblet gravy will thicken nicely and can be kept warm on the stove until you are ready to eat.

For maximum flavor, stir in some of the pan dripping from the chicken or turkey. Strain the fats and solids out of the drippings for a smoother gravy.

Aside from the giblets that are found in this recipe for Homemade Gravy, there is another ingredient that you may find surprising: sliced bits of hard-boiled egg.

Not everyone knows how to cook hard-boiled eggs but once again, Chef Kat shows you how in the previous link.

This may sound unusual to some of you, but try not to judge until you taste this classic southern recipe.

The eggs will grow on you, and by the end of the meal, you’re going to wish you had tried this gravy recipe sooner.

This giblet gravy is terrific for either your favorite chicken recipe or turkey recipe. Just use chicken giblets or turkey giblets, depending on what you are making.

My Texas friends put this meal together for me a few weeks ago while Scott was out of town. Watching them prepare this giblet gravy was only part of the fun.

The real joy, as is the case with any good meal that is shared between family and friends, was the conversation. Isn’t that what holiday dinners are all about?

Be sure and look at our Rich Roasted Turkey Gravy Recipe. Our kids ask for it by name!

What can I do with leftover gravy?

My favorite ways to use any leftover gravy are in a homemade pot pie or in a turkey shepherd’s pie.

What goes good with gravy?

A better question might be what doesn’t go well with this recipe! My personal favorites include cornbread dressing and garlic mashed potatoes. They truth is though, I can eat this giblet by itself!

How long does giblet gravy last?

It depends on how you store it. Be sure to store it in one of the following ways within two hours after removing from heat:

See our full collection of easy side dish recipes!

🧑‍🍳 Tried this recipe? Please leave a ⭐⭐⭐⭐⭐ rating in the recipe card below and a comment. We love hearing from our readers!
⏭️ Stay in touch with us on social media by following us on Facebook, Pinterest, Instagram, and YouTube!
📬 Get our recipes delivered to your inbox for FREE! 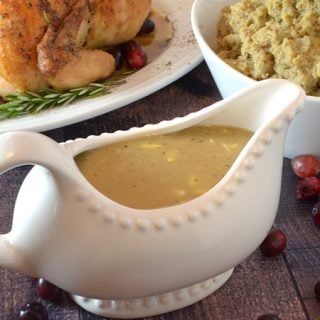 for the Giblet Gravy

Updated from the original date of publication from November 20, 2016