Try this Cornell chicken, and you’ll agree it may be the best barbecue chicken you’ve ever tasted.

Growing up, I always believed this was my Grandpa Zehr’s recipe for barbecued chicken. Of course no one referred to it as grilled chicken back then, nor do they today.

Throughout New York state this is called barbecued chicken. Through the years, with just a little bit of personal disappointment, it gradually dawned on me that it wasn’t my grandfather who invented this New York state classic.

This recipe for New York Chicken works great for any cut of the bird. Sometimes I’ll buy a package of drumsticks to make this way, which is how our boys love it.

In the mid-west, specifically Wisconsin, there are “brat fries” every single Saturday, somewhere throughout the state – winter, spring, summer, and fall.

Be sure and but apple cider vinegar (the dark stuff.) One of the mistakes I used to make when first learn how to make this recipe was to use the clear distilled vinegar. The clear vinegar is too mild for this recipe. As my sister, the chef would say, “Like kissing your sister.”

When making this Cornell chicken barbecue, it’s normal (I even prefer) to have some char on the skin. The coals will be kept hot with the oil in the marinade. Be sure to have some water handy to put out any flames!

If you haven’t ever had Cornell chicken, make it a goal for this grilling season!

If marinating, it’s best to soak the meat a minimum of 2 hours, but up to 24 is even better. I have marinated it for 2 days before grilling it and it turned out beautiful and delicious.

Now he’s a commercial airline pilot and I have a pretty good feeling he will be passing this recipe on. To the next generation, and beyond.

You can bake Cornell Chicken in the oven. More than once we’ve started on the grill and finished in the oven due to rain! Is it the same as on the grill? No, but it’s still delicious!

🧑‍🍳 Tried this recipe? Please leave a ⭐⭐⭐⭐⭐ rating in the recipe card below and a comment. We love hearing from our readers!
⏭️ Stay in touch with us on social media by following us on Facebook, Pinterest, Instagram, and YouTube!
📬 Get our recipes delivered to your inbox for FREE! 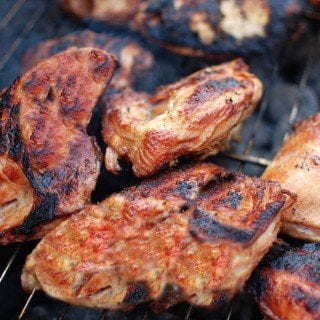